In 1991, Founder and CEO of Innisfree Hotels Julian MacQueen got a phone call from a fellow member of the Baha’i Faith in Hollywood, Florida.

Her name was Cindy Holmes. The wife of the man who created the boogie board, she was a “surfer chick and a real big-hearted kinda gal,” according to MacQueen.

Holmes had a landscaping business. Her greenhouses sat on Seminole tribal land, and she was in talks with Chief James Billie. He told her about a piece of property that he and 12 other federally recognized tribes under an organization called the United South and Eastern Tribes, or USET, held in Nashville.

USET wanted to build a hotel on the land, along with an office building and a cultural center where visitors could experience the native peoples’ culture and habitat.

Holmes told MacQueen the tribes had been ripped off by several white developers, and they wanted to know where they could find an honest one.

MacQueen, who had relocated from Tennessee to Alabama, initially thought the project wasn’t central to what he was trying to do with his newly established company. He didn’t know the Nashville market well, but the land turned out to be directly across the street from the only hotel he had built there.

“This was not a good time to try to build hotels,” MacQueen says. “It was very early in my career. It only had two or three hotels. I was not a good risk for a bank to take on as a hotel developer.”

Baha’is have a belief that America will not reach its full potential until Native Americans are equally recognized economically and socially. So the first thing MacQueen did was meet with Holmes and Jack Guillebeaux, who would later become Director of Culture for Innisfree Hotels.

“I thought it would be cool to promote the tribes,” MacQueen recalls. “None of them had money at the time, since it was before legalized gambling began on tribal land. And I didn’t have any money either, really. I just had some experience building hotels … and I was honest.”

Before forming a formal partnership, MacQueen wanted to make sure he wasn’t falling into the same stereotypical relationship of a minority and a dominant white male, where he would drive the relationship while they would be subservient.

So he met with the head of the USET organization and the executive committee, made up of the Chiefs of all 13 tribes.

What they did next was quite remarkable.

The group set about drawing up a treaty, stating they were all equals and ensuring the dignity of the Native American people would be recognized and honored as a guiding principle of the partnership.

Guillebeaux worked on the treaty with the Chief of the Iroquois tribe, a fact of interest to MacQueen, who notes the Iroquois influenced the Declaration of Independence.

To this day, the treaty hangs at the Innisfree office: 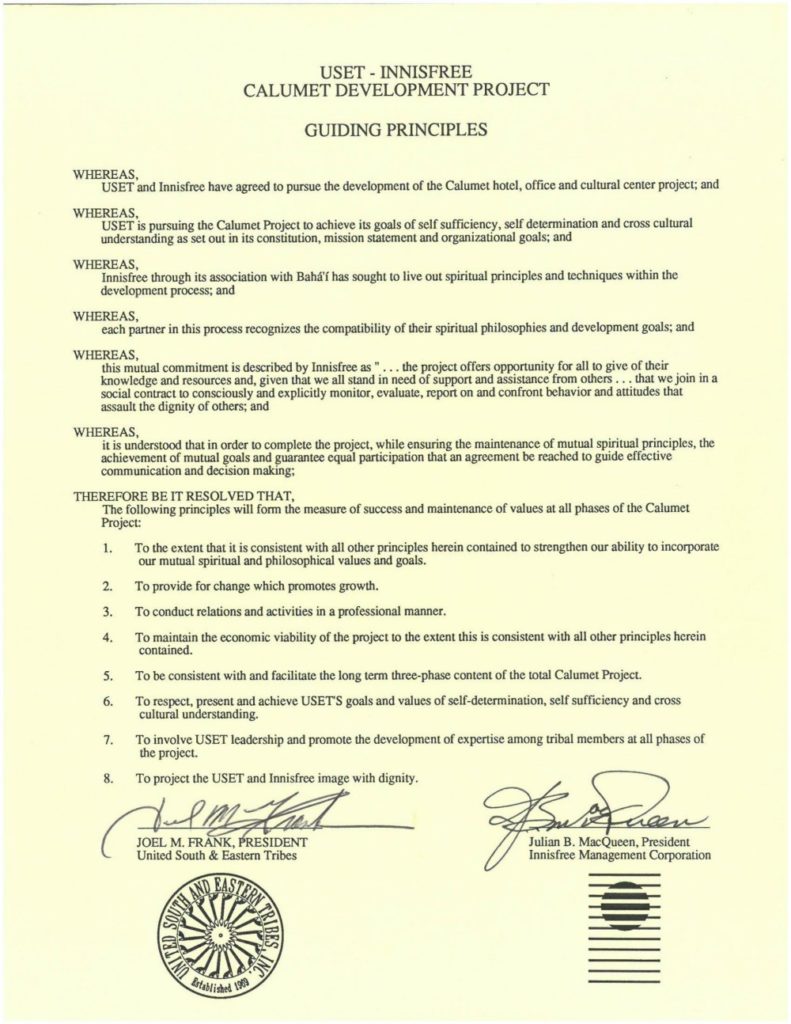 Next, they set about finding the money to build the hotel and cultural center. After visiting more than 20 lenders and receiving more than 20 rejections, MacQueen finally secured funding from a Savings & Loan in small-town Indiana.

The hotel was a Best Western with 80 rooms. Next to it, they built a 40,000 sq. ft. Class A office building, the Calumet Center. It was all glass, so the surrounding forest was reflected in the building itself.

The master plan incorporated 10 acres of U.S. Army Corps of Engineers land next to the Percy Priest Lake and Dam, where visitors could experience each tribe’s habitat in the form of a walking museum. From the hotel, guests could stroll from village to village through representations of each tribe.

The location was one exit down from Opryland theme park, a great driver of tourists. Eventually, when Opryland closed, Innisfree sold the hotel but retained the office building – where USET is still housed, along with Indian Health Services (IHS).

Now, two decades later, many of the tribes have casinos – like the Poarch Creek of Atmore, Alabama, who paid off the $200 million Wind Creek Casino and Hotel in just three years.

In 2009, when Innisfree was under contract to build the Hyatt Place Pensacola and the Holiday Inn Resort Fort Walton Beach, MacQueen reached out The Poarch Band of Creek Indians, original members of USET.

“They were trying to diversify their investments beyond gaming,” he says. “They were looking for somewhere to put their money, and because of our history in Nashville, we were the first they went to.”

Since that time, Innisfree and Poarch Creek have built two hotels, as well as the upcoming Hilton Garden Inn Fort Walton Beach – partnering on nearly $100 million in new projects over five years.

“What’s important is how we started the relationship,” MacQueen notes. “It was very one-sided and we were very aware we had the opportunity to take advantage and be unjust in how we did it … we chose not to, and 20 years later it came around.”

Here at Innisfree, we believe if you earn a person’s trust, they will return it. This is especially true with Native Americans, in light of their history with the white man, yet it resonates with all people.

If someone believes in you, they will want to do business with you.